My Use Case (maybe very edge)

So at the moment I use FoldingText to make outline notes and feedback when marking student work. Here is very basic demo file with the way I tend to work for marking, my notes are a little more complicated, Ill share sample if I can. Atom Folding Text seems to have no option for more free form text ? I understand it is more outliner than markdown editor ? Will I have to change my workflow massively for new Folding Text. I have gotten very use to typing # hash for creating the folds and the cmd+2/3/4 etc. > for blockquote etc. maybe this is not what Atom FoldingText is about… I know you mentioned some markdown stuff coming back ? Just wondering what features / comparisons to current FT.

Because of forum restrictions on files that can be uploaded, I’ve added .ft to that, but if you remove the .ft you should be able to open it in Atom as an FTML translation of your file.

As in MD, you can flag particular lines as headers (in Atom, no need to count hashes, because headings and sub-heading can be distinguished by indentation)

Is the key problem the familiar use of hash as a route to making a heading ? (That, I think is something which could be set up, if it seems the most familiar gesture to use)

PS, have you installed the current draft of the MD package ?

I’ve installed both although I am confused as to what each does ?
I like being able to break out into Paragraphs I could handle the headers but its more the free form text inside a folding part that I love…

maybe this is not what Atom FoldingText is about…

The general use case that you mention sounds exactly like the sort of thing that FoldingText for Atom is intended for.

In the end if you want a Markdown workflow the foldingtext-markdown package is designed for that… but it’s very much a work in progress at the moment. It’s pointing a general direction, but many rough edges.

But I wonder if you really need Markdown for this particular use case. It seems to me you have a pretty simple outline that looks like:

So the change over your previous workflow is instead of using # to create a heading you use Tab to indent one item under another. The end result is the same outline structure, but I think the “structure” part is a bit more visible in FoldingText for Atom.

The next step depends on how much structure you need in the notes. If quotes are something common you might just mark them up by making the text italic… select the item and Command-I. You might be able to create all the structure that you need with that sort of convention. If you wanted to be fancy you could also use the q tag instead of i by: Command-Shift-P then select “Outline Editor: Toggle Inline Quote”.

If want more structure/categorization of items then you will need to use foldingtext-markdown or something similar. The way that foldingtext-markdown works is pretty simple. It just adds commands for setting the data-type attribute on items in your outline. And then styles those items based on the type.

So to create a block quote (with foldingtext-markdown installed) you issue the command “” and as a result the item get a data-type="BlockQuote" attribute set.

Atom Folding Text seems to have no option for more free form text ?

This is an on-going issue. I’m still trying to narrow down examples of exactly what people mean by this at a keystroke and command level. There’s quite a bit of discussion here: http://support.foldingtext.com/t/foldingtext-for-atom-0-1-0/782

Jesse I think your totally right I like to keep pressing return … but yes I like the markdown thing is good for a little formatting but Ill need some shortcut’s I’m sure. The Command Shift P thing is slow…

Can I import an FT file into Atom FT ? As I have some crazy notes that I would like to see how they get translated.

I’ve been trying to figure out how best to communicate this situation as well. I think it has to do everything with the environment I’m working in on the screen vs. the functionality of a program.

I gave up on trying to use FoldingText as an outliner not long after I first purchased it, for reasons that I think you’re previously mentioned. Many of those reasons appear to be resolved, or at least reconsidered, by the structure you’ve put in place with Atom.

While I agree FoldingText never fully worked as an outliner, it did become a great tool for keeping a journal or tracking notes around a topic. And for some types of project management – usually in conjunction with TaskPaper.

The key part of FoldingText for me is how it functioned as a writing environment with a totally unobtusive interface, formating options, and set of commands (I’m not referring to Markdown here…I rarely make use of that unless you consider the ## as markdown).

While I can do the same things in FT with Atom, there are a few elements that I currenty see as drawbacks. Using FT with Atom does have the same clean working interfaces as FoldingText 2 does, both for reading and typing as text (FT Atom is far superior as an outliner). The triangle is (for some reason I don’t understand) more obtusive than those hashmarks when used as topic headings and not as a traditional outliner. I find that instead of working in a writing environment that I can apply some outline like structure to, in Atom I instead am taking an outline structure and forcing it to act more like a standard writing environment.

There’s a difficulty in communicating this, I believe, because it’s not a question of functionality of the tool but in how a person interacts with the words they’re typing or reading on the screen. That experience is very subjective, but I believe the subjective experience is one of the hallmarks of the products you’ve developed (I’m including WriteRoom and TaskPaper). It may be difficult to codify or communicate, but I think it remains important.

I don’t know if I’ve helped clarify or further muddied this discussion. I’ll likely be returning to this topic as I continue exploring Atom and getting further clarity on what I feel I’ll be gaining and what I feel I’ll be losing. I haven’t played with the style options much yet (I’m not too strong on those parts but can usually muddle my way through). It could be that a lot of what I currently see as issues could be fixed by creating custom settings.

My apologies if this sounds initially very negative toward the changes in FoldingText. That’s not necessarily the case and I’m interested in seeing what this becomes. I think I’m more interested in what’s going to become of TaskPaper…I actually use that quite a bit more.

Atom makes it easy to define your own keybindings:

Can I import an FT file into Atom FT ? As I have some crazy notes that I would like to see how they get translated.

Before going to far I’d like to mention again that the foldingtext-markdown package is a work in progress. But yes you can import/export Markdown from a FoldingText for Atom outline using Command-Shift-P

Right now those commands work for basic Markdown formatting but not much more.

Jesse thanks for all you replies I am very excited about new folding text. There are some things to iron out with the distraction free writing within an outline bits but it feels like you are getting there. It feels like a very good rewrite for FT and I can wait till it gets it own non Aton UI.

I added cmd + 1 for heading which is nice, but headers are not the same as FT2 in that they act as a fold…
But could the markdown syntax not be adapted in like FT2 instead of key mapping or would this not work ?
I do like the ease of using keyboard symbols to set what something is,

Exactly but in FTA headers are just headers with formatting

Maybe I’m misunderstanding what you’re saying, but when I create a header in FTA (I’m using the default ctrl-h), it behaves as any other outline element. Child records fold up underneath it, and the header acts as a foldable child element for any parent node.

There’s no visible triangle or marker, but it folds just the same.

but perhaps you are missing a single key-stroke, like ⌘4, to simultaneously set both header status and [ level | formatting style ] ?

@vsp you are right but without the indicator in FTA I could not tell.
@complexpoint thanks, is that a FT2 theme ? it looks very nice.

in charge of the outline

Well … FoldingText for Atom gives you more control over the outlining (drag and drop, no confusion about numbers of hashes or changing ones mind about the frontier between hash-outlining and bullet-list outlining) …

Perhaps that’s really the issue ? Maybe a bit of style-sheet work would help ? I’ll see if I can find a moment over the weekend to adapt that dark style to FoldingText for Atom, adding familiar prefixes to different levels of header etc.

PS in the meanwhile, if you are familiar with HTML styles, and would like to get a stronger sense of what is going on in FT HTML you might enjoy experimenting with Alt-Cmd-I, and taking a look at the HTML and CSS view of an FT for Atom page: 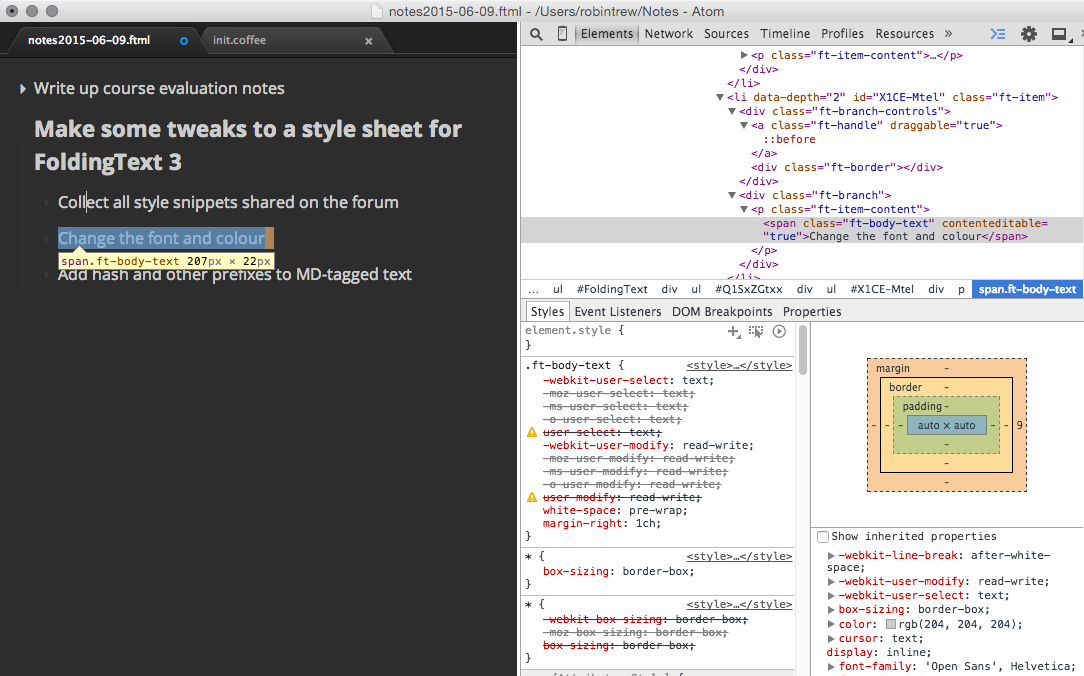 Well … FoldingText for Atom gives you more control over the outlining (drag and drop, no confusion about numbers of hashes or changing ones mind about the frontier between hash-outlining and bullet-list outlining) …

This issue between Markdown hash-outlining and bullet list outlining was one of the major reason didn’t really work for me in outlining (a thing I was and am still practicing in). For instance, when taking meeting or study notes, I couldn’t decide what was supposed to be a hash and what a bullet outliner.

If i’d write a document, I could, for instance, decide in an outliner like OmniOutliner or FoldingText for Atom that first level nodes are top level headers, next below that are second level headers, and those below them are paragraphs. If I decided to use this style in some document, it might help if I used some style that made first level big, second smaller, third smaller still. I liked this kind of styles from OmniOutliner.

Later on, when I’ve outlined enough, maybe I can export it to other format and go on from there with other editor, or Atom in other mode. I’d personally rather do the outlining in an application like OmniOutliner or FT for Atom. I might use Markdown or plain text in taking very early notes which would later on go to outliner. I might also use Markdown after outlining, in preparing the document for publication. I might use a mind mapping tool somewhere there in between, maybe before taking it to outline. I haven’t polished the process for myself and I’m heavily experimenting currently, but that’s the direction I’m going currently.